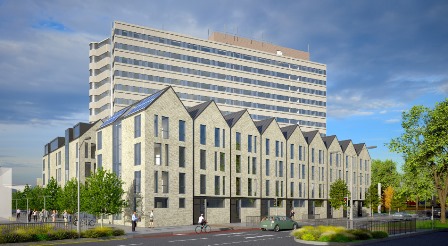 Acting on behalf of Kier Property, Hellier Langston has completed the purchase of the former East Street Shopping Centre in Southampton from Joint administrators from KPMG.  The 2.26-acre site comprises cleared land on which the former East Street shopping centre used to sit, a vacant office block known as Capital House and a public house.  The Kier team has developed a proposal that offers a 423-room student-led scheme, together with associated retail and leisure space.

The site is located in a prime space close to Southampton Solent University and a short walk from the city centre and its associated shopping and leisure facilities.  The scheme forms part of the drive to regenerate Southampton through the city centre masterplan.

Gillian Scarth, senior development manager at Kier Property, commented: “The redevelopment of this prime site in Southampton city centre has been eagerly anticipated since the site was cleared in 2013. It’s a great success story and we are looking forward to playing a key role in the regeneration of the city.

“The East Street scheme forms part of our UK-wide strategy to acquire land and property in order to deliver a full range of direct-let student facilities.”

Administrators were appointed to Arcadian Estates (AEL), which owned the East Street site, in December 2014, and the site was brought to market in spring 2015.

Ed Boyle and Jim Tucker from KPMG’s restructuring practice, and joint administrators of AEL, acted on the sale of the site.

In addition to the student accommodation, Kier Property has also submitted plans for retail and leisure use, and a decision on these elements is expected in April.

Jason Webb, director at Hellier Langston, commented: “we are very pleased to be involved in this significant regeneration project in central Southampton. The proposed scheme will certainly lift this area which has been run down for some years, and open up the pedestrian link between East Street and the area around City College.”