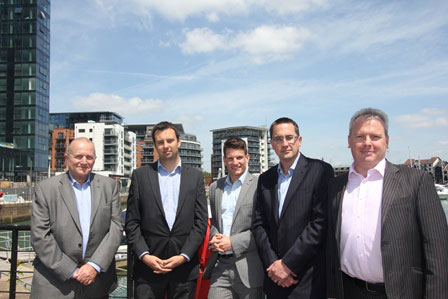 South Coast agent, Hellier Langston, has opened a new Southampton office to meet increasing demand for its services along the M27 corridor.

The firm, which has its head office in Fareham, has also appointed two new directors to lead its expansion into the Southampton market. Jason Webb and Matthew Poplett have extensive experience in the South Coast commercial property sector and join Hellier Langston from JLL’s Southampton office.

Hellier Langston’s new Southampton office, which opened this week, is based at Enterprise House in Ocean Village, an area popular with many of the city’s professional services firms.

Matthew Poplett has specialised in advising on industrial and warehouse properties across the South Coast for the last eighteen years, working for Chesterton, King Sturge and Vail Williams.

Jason Webb started his career at the Southampton Valuation Office and has spent more than fifteen years with South Coast based firms, specialising in office agency as well as development and investment consultancy in the commercial and residential sectors.

Director, Derek Hellier, comments: “Hellier Langston celebrated its 25th anniversary last year and the opening of our new Southampton venture and the addition of two key figures from the South Coast property market to our executive team, reflects the degree to which we have grown and developed as experts in all areas of commercial property in the region.”