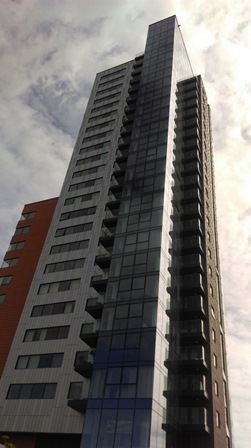 With the purchase of the consented 145,544 sq ft/ 211 unit scheme on the corner of Queensway and Bernard Street from Southampton city council, Rockspring Property Investment Managers working alongside joint venture partner Atlas Residential are the first institutional investors to dip their toes into the PRS sector in Southampton.

Atlas Residential, one of the largest private rental sector operators in the US, owns and manages more than 75,000 apartments with a transaction value of more than $7bn (£4.4bn). The Southampton project is Atlas’s first in the UK.

With a pedigree for delivering schemes of this type, albeit not in the UK so far, Atlas have made a clear statement on the viability of such schemes in Southampton, and we will see if this helps to open the door for further institutional investors to look at Southampton for PRS schemes.

There is certainly demand amongst the major investors to get into the residential sector, with the likes of L&G and M&G announcing their intentions to do so, although this has so far only materialised in London and to a lesser extent the ‘Big 6’ of Birmingham, Manchester, Leeds, Bristol, Edinburgh and Glasgow.

In the micro market, the fundamentals for investment in the sector are striking: demographic trends suggest that demand for housing will continue to rise. The UK population is expected to expand by around 0.8% per annum in the medium term

(2012-2021) – one of the fastest growth rates across Western Europe. At the same time, household size is continuing to fall, with more people living alone. Supply is already lagging behind demand, and this trend is expected to continue. Indeed, housing construction has been on a downwards trend since the 1970s. Only 138,070 homes were built in 2013 – well below the level consistent with new demand.

This demand/supply imbalance will place upwards pressure on house prices in the longer term. Barriers to home ownership remain high, with significant affordability constraints, albeit this has been alleviated to a certain extent by Help to Buy. This, in turn, is likely to fuel demand for rented accommodation – a sector which is increasingly dominated by private rather than social landlords. The PRS has been on the rise over the past decade, and now represents 19% of the English market, up from 10% in 2001, according to Department for Communities and Local Government (DCLG) data. At 4.4 million households, English private rentals are at their highest level since the 1960s and have overtaken the size of the social rented sector.

Simply put, private investors have seen astonishing returns over the last 20 years from buy to let investments, and the institutional market wants to get in on the action.

Looking at the micro market, Southampton, along with most of the South East has seen residential prices outstripping incomes over the last 20 years. The average earnings for full time workers in 2014 was approximately £25,000pa (Source: Annual Survey of Hours and Earnings 2014 (workplace based query, NOMIS)), and the average house price £172,250 – a multiple of 6.9, compared to 1998 when it was only 3.9 times. 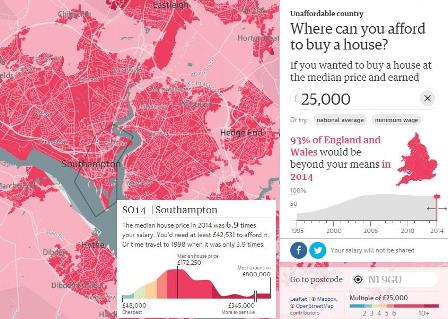 The Guardian interactive map from which the diagram above was taken can be found at:

With a similar disparity developing between demand and supply for residential accommodation, clearly the fundamentals for investment in PRS are mirrored in Southampton. The main barrier to institutional PRS investment in Southampton may well therefore be lack of available sites and stock in the right locations.

Institutional PRS investment has tended to focus on the upper end of the market, with more boutique schemes offering accommodation that gives tenants access to great locations and amenities like public transport and shops. Successful schemes have provided tenants living environments that afford them the quality of life and accessibility to locations they either can’t afford or aren’t interested in investing in over the long term.

Whilst London, and indeed the Big 6 can potentially provide these qualities in multiple locations, Southampton has only smaller pockets where a combination of these amenities can be found. Waterfront locations will inevitably add an attractive edge and drive higher demand, but these sites are limited in number, and the competition for such sites is becoming more intense.